Goffs Oak Methodist Church is now 150 years old, having been established in 1868 on the same site as today. Over the years, the Church has seen many changes in society, and we are proud that it has represented our community throughout that time. Of course, the Church is much more than its buildings: the community of faith has worked diligently to meet the changing needs of the local community. There is a real sense of warmth and generosity in the welcome that is to be found there, and the buildings have played a large part in enabling various groups to come together, thus providing a focal point for village life. Whilst numbers attending Sunday Worship may have decreased a little, there is no shortfall in real growth which can be witnessed in the commitment to prayer, service and pastoral outreach which exemplifies the life of our Church. 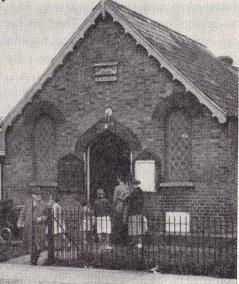 The story begins in the 1860s, which were years in which the Primitive Methodist Connection was vigorously expanding its evangelising efforts in various rural areas. Goffs Oak was then a village with a population of less than 600, but there was a community of farming folk, who deeply cherished the Nonconformist way of religious life, and wanted to do something about it. There came into being a small Primitive Methodist "preaching station", and there is mention of a John King arriving on the scene in 1851 from Rede in Suffolk, who was a fervent pioneer in the building of the Church. He served as a trustee for 53 years dying at the ripe old age of 98. 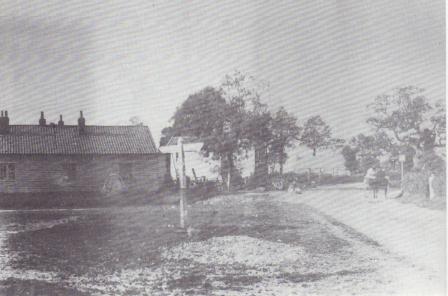 The First Primitive Methodist Chapel in Goffs Oak was built in 1868, and was big enough to seat 100 people. Its foundation stone simply said "This Stone Was Laid October 19th, 1868 By J. Fowl, Esq., of London". It is not known how much the building cost, but the money was raised "through zealous endeavour by a small company of faithful and determined people". That is, the original Chapel was bought and paid for by the local congregation. It was built in Common Road (as Newgatestreet Road was known at that time). It drew packed congregations, and became a centre of warm fellowship and simple worship. The building itself was described as being of 'unpretentious brick and slate', and the interior as 'severely functional'. What else would one expect of the 'Primitive Methodists' from which we evolved? 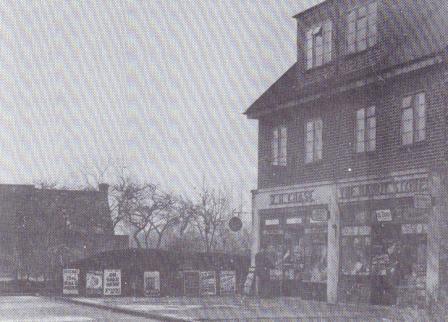 It seems from early records that Goffs Oak Methodist Church was part of the "Enfield Station of the Primitive Methodist Connection". The three other Churches in the circuit at that time were: Enfield Chase Side (now the Salvation Army hall), Bush Hill Park, and New Southgate. Whilst the records from the time are sparse, the Baptism Register, started in 1869, shows entries covering Edmonton, Enfield, Southgate and Tottenham, as well as Cheshunt (GoffsOak). The first baptism in Goffs Oak was recorded in 1872. 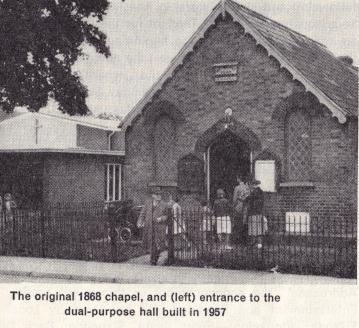 That original Methodist Chapel stood firm until the 1950s, when a building boom in housing made it feasible to extend the premises. In 1957 a dual-purpose hall was built on adjacent land, and this was used for worship, as well as for all sorts of local functions. The old chapel remained, being utilised mainly for youth work, until eventually it had to be demolished, and was replaced by two prefabs.


The present Goffs Oak Methodist Church was consecrated in 1977. 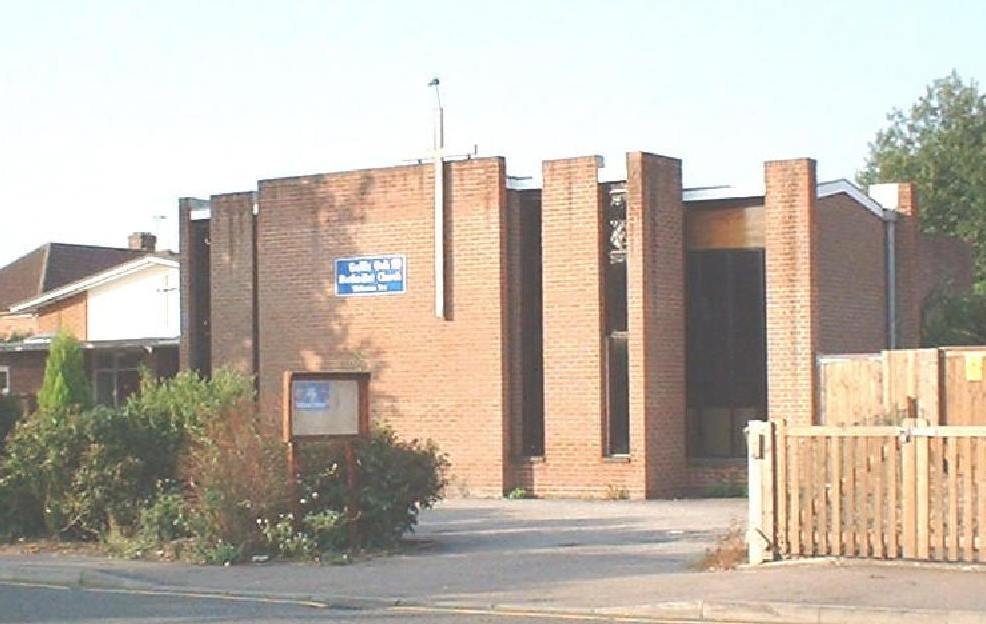 The following is an account of how two people met and got involved in the development of the new Church. A happy accident led to a buildings surveyor arriving at just the right time...

As the conversation progressed among the many bags and boxes that we still had not time to sort out, Donald (Rev. Sampson) asked me what I did for a living. When I told him that I was a buildings surveyor, his face sort of 'lit up'. Donald told me that there had been a plan, dated 1955, for a Church which would have been erected next to the new Church Hall (built in 1957), but there had been a lack of money. He said he had been looking for someone who could help with the planning and building of the 'New Methodist Church', or a least a proper area for worship, as they only had the Church Hall (which was used for all services, and other activities during the week).

We visited the Church on the Sunday morning, enrolled the children in the Sunday School, and met some of the congregation. Time passed, and there was a push to raise money for schemes which would provide a sanctuary for worship. For example, it was suggested that a Chancel be put on the side of the building, facing on to Wesley Close, or that the stage be turned into a Chancel. But this would have restricted the use of the stage, which was quite considerable in those days. Another suggestion was that the 'Projection Room' (now known as the Beginners Room), might be turned into a Chancel. And various other ideas were considered along the way.

More time passed, and in total there were seven schemes for which plans were drawn up. Along with this there were schemes to raise money including 'Gift Days' and 'Fete Days', Sponsored Walks, and other fund raising with the help of village residents. In the end it was felt that, with guidance and help, we might - just might - have enough money to build a Church, with the help of Rank Trust, to support and serve the community. This led to further problems, ranging from planning to further fund raising, and consultations with the congregation, the Circuit Minister, the Rank Trust and the London Mission.

Plans were revised and re-revised and, as it got nearer the time, a builder had to be found - Firmins was appointed when the plans were finally approved. I went to the Building Centre in London and various other places to find the right bricks for the job. Because it would be a brick finish to the Sanctuary it had to be an interesting brick, not just an ordinary flat red brick!

lt that the church had to be able to seat 200 people, in case of large services, and yet not to feel cramped for space. It was also felt that it had to be a flexible space, able to be reduced or expanded as necessary. It was therefore designed so that the back portion of the Church could be opened to allow greater space for worship.

It was also agreed that there would also be sliding doors that would shut off the Chancel during the week, to maintain part of the Church building for private and personal prayer and meditation, whilst the rest of the space could be used for various meetings during the week. The sliding doors would be the full height of the Church, heavy enough to be sound-proof, but still fitting in with the decor. There would be a separate entrance and hall, which would give access directly to the Church, rather than through the entrance to the Church Hall. It had to be taken into consideration that a bride and her retinue could make an entrance through the back of the Church in a dignified manner, right up to the Communion Rail. And it had to be possible for a coffin to be carried in the correct manner through the inside of the Church to its resting place.

It was also felt that raised flooring would identify the centre of Worship, and could also be rotated by ninety degrees to fit into the side part of the Chancel, when a small, intimate Service, with only a few people, was necessary. Entrance would then still be possible through the main door of the Church.

After all these things were taken into account, it was agreed that building could go ahead, and the Youth Club, Guides and Scouts were moved from the two prefabs that were on the site. When excavations commenced the original foundations were found. As the original Foundation Stone was taken out of the original Chapel, I felt it would appropriate for it to be laid at the front of the new Church, sitting over the original foundations, to serve as a reminder of what our forbears had achieved in creating the Church a hundred years earlier. 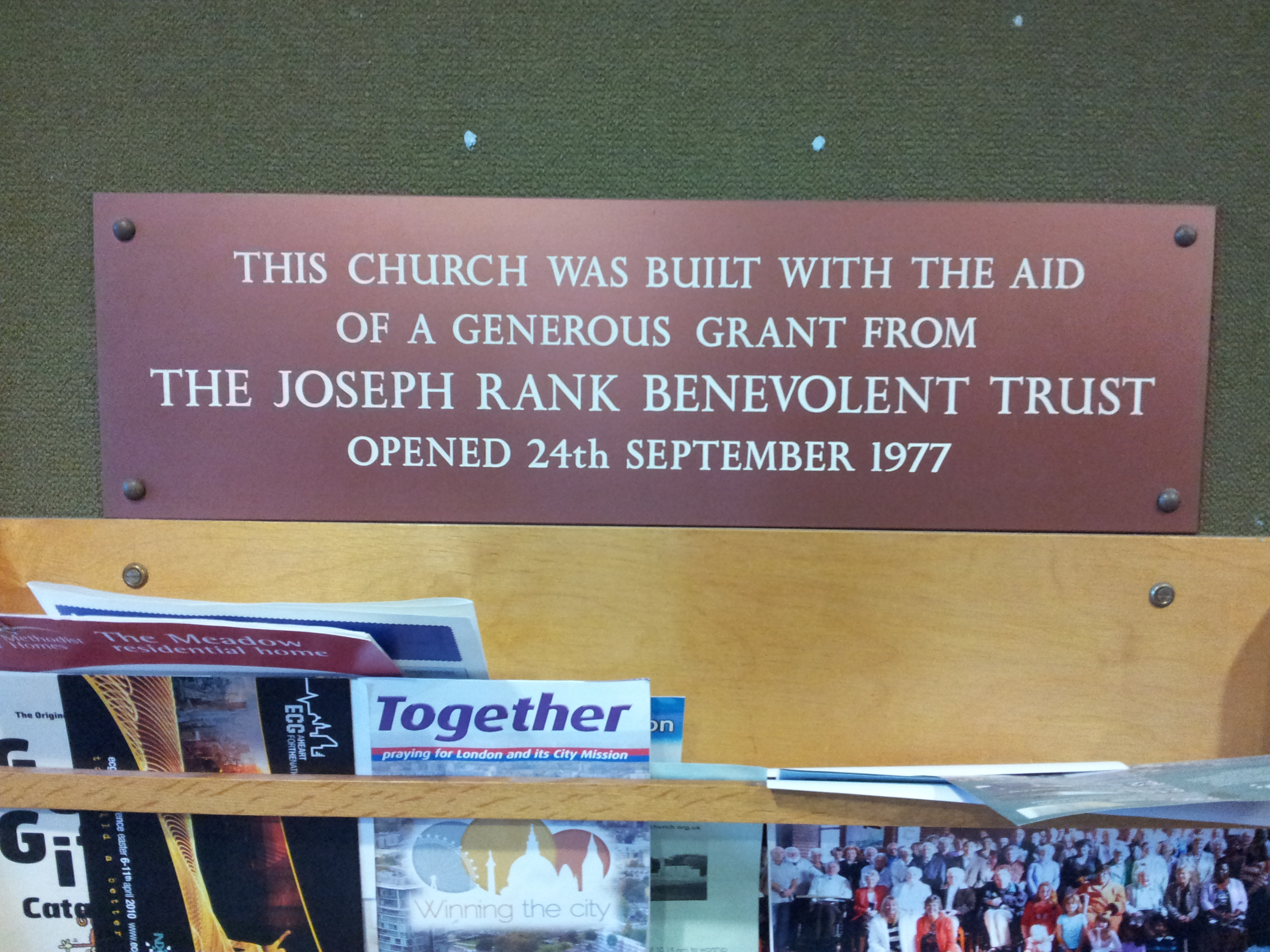 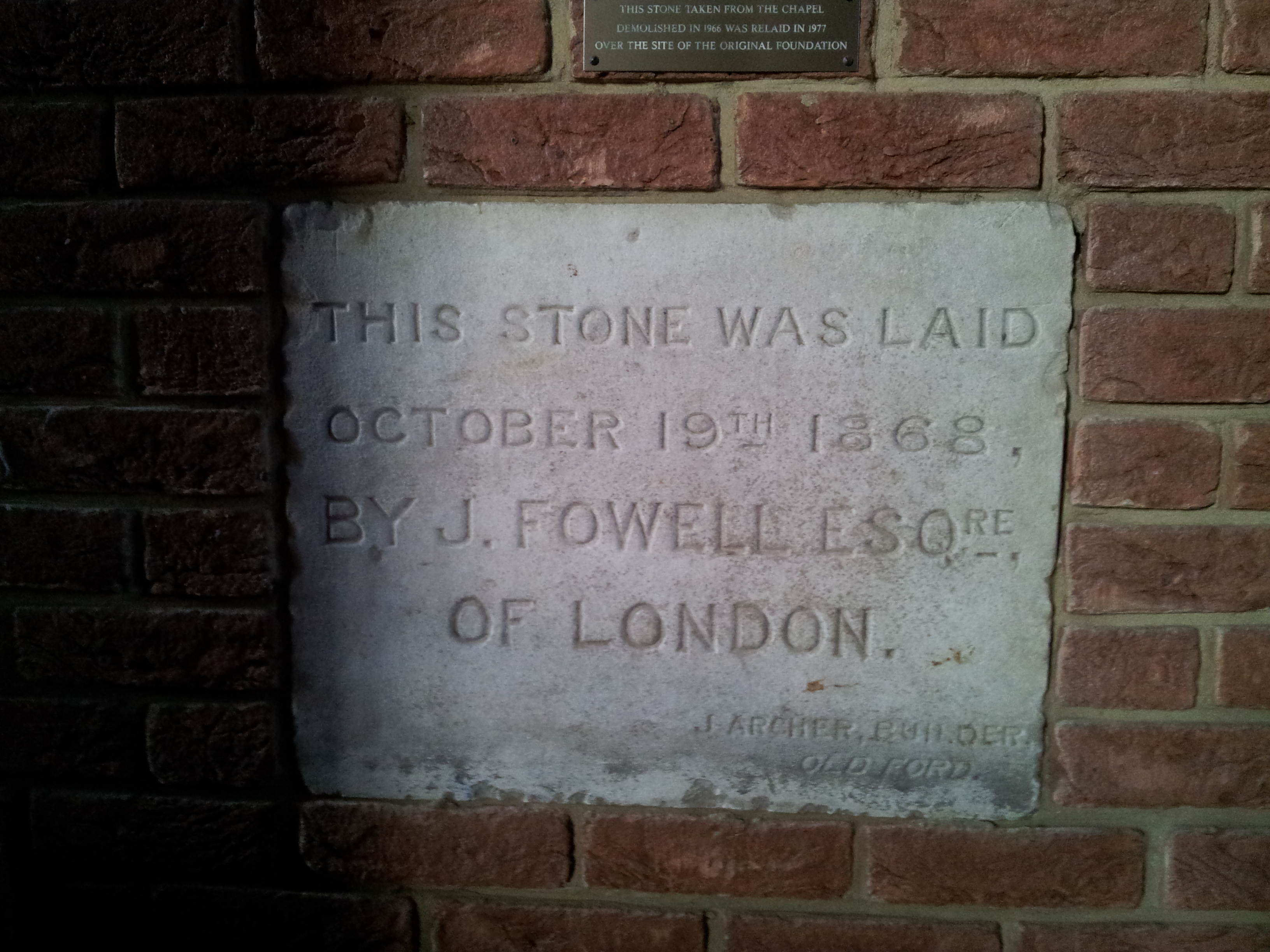 I felt privileged to design this building for the Worship of God. I passed the building every day on the way home, and was able to keep a strict eye on it as it was rising from the ground. At last it was finished, and I was delighted to be present at the Opening ceremony, along with representatives of the Circuit, the builders, previous Ministers, and a very full congregation. I was even more delighted when my daughter was married in 1985 in the Church.